A new name, a new dimension and a new speaker line-up – but: What the Fifteen Seconds team got off the ground this year, was as phenomenal as every year. You missed the fifteen seconds festival or want to get an insight into my 3 marketing key take-aways? Then this post is exactly what you should read.

Regarding this year’s Fifteen Seconds Festival, we experienced a whole new dimension when it comes to combining knowledge transfer, entertainment and networking. Three years ago, nobody would have believed that there would ever be a chance to get more than 3,000 marketing and business enthusiasts as well as world-class speakers from big global brands to a conference in Graz. Besides the great experience, the good vibes and the great mood, I draw three important lessons from this year’s festival.

Journalists are going to be marketing heroes

Vice, Forbes, The New York Times and The Washington Post are only some of the many big media brands whose speakers rocked the stages of the Fifteen Seconds Festival 2016. What they all have in common is that they utilize storytelling to build and shape their brand. And not only their brand: Sebastian Tomich, Senior Vice President, Advertising & Innovation at The New York Times, again pointed out in his keynote that storytelling is not just a trend or a marketing buzzword, but much more an essential element of each corporation’s communication strategy.

Observing the last two year’s developments of the New York Times’ business model was highly interesting to me. One reason for that is the T Brand Studio, a department, which was launched to produce branded content and exceptional stories for big global companies. And the business is growing incredibly.

This is only one example regarding the fast growing demand for branded stories that engage and touch people. “T Brand Studio’s content sometimes performs even better than the New York Times’ editorial content”, states Sebastian Tomich at the 2016’s fifteen seconds festival. The bottom line is that there is a good chance that the future’s marketing heroes are the journalists out there.

T Brand Studio realized the following video for the shoe and bag label “cole haan”. In my point of view this example is a masterpiece in terms of branded content and perfectly shows what the future of this marketing discipline could look like.

Imagine a great story with a heart-stopping plot and a bad, really bad, storyteller, who presents it. No matter how well-written this story is, if the person whose reading it, doesn’t perform well, the audience will be bored inevitably. In these days the mentioned “storyteller” more and more often stands for various different technologies with which the story is told. It stands to reason that just a good story is nowadays not enough.

This is where technology comes in: There are several new technologies, which are currently still in its early stages of development. Let’s take VR (virtual reality) in combination with 360° videos for example. Combine these two things and you’ll get thousands of possibilities to create amazing experiences. The probably most important thing is however that storytellers have to be aware of the strengths and weaknesses of every new technology.

Let me explain that by sticking to the examples “VR” and “360° videos”: Let’s say the Hollywood blockbuster “The Lord of the Rings” was filmed with a 360° camera. That would be really cool when it comes to experiencing all the big battles for example. But when it comes to a mysterious and dramatic dialogue between Gandalf and Frodo, you are much better off with nice close-ups and a static picture. VR combined with a 360° video would in this case be the probably worst choice.

The example below shows a nicely done VR video for Mini. Click to try it and drag the picture to watch the video from different angles.

One of the best sessions at the Fifteen Seconds Festival was definitely the one from Sebastian Bayer, CEO Young & Rubicam Vienna and Andreas Roitner, Head of Strategy Young & Rubicam Vienna. In their master class they did away with the model of using conventional brand models to define and shape brands. Their approach is that a brand is getting interesting to its stakeholders not by communicating the same boring message again and again, but by charging a brand with the help of combining two contrary brand values to a pair. To find out these pairs of values, Young & Rubicam did the worlds biggest and most extensive brand study called BrandAsset®Valuator. The concept of communicating values which are opposing each other but are also of complementary character, is enhancing a brand’s communicative tension. This is called brand tension.

Sebastian Bayer and Andreas Roitner emphasized their theory at the 2016’s fifteen seconds festival by presenting some really well-developed brand messages. One of them was for IKEA. For them, they uncovered a pair of contrary values, which resulted in the claim “uniqueness for everybody”. In this case the contrary values/terms are “uniqueness” and “for everybody”. And this is really amazing, because it perfectly reflects the company’s mission and how people perceive the brand in every day life. This claim gives the brand an animating tension that noticeably increases the vividness of IKEA. According to Bayer, the clue is that brands today need a fascinating contradiction instead of a single minded proposition. In the case of IKEA that works out perfectly: “When people buy a new piece of furniture at a local IKEA for example, they think they’ve bought swedish signature furnishings – in fact they’ve just bought the exactly same product as their neighbors did”, Andreas Roitner at the Fifteen Seconds Festival 2016.

This year’s Fifteen Seconds Festival was again astonishing. My congratulations to the whole team and especially to Nino, Thiemo and Stefan. Really well done – it was a pleasure! 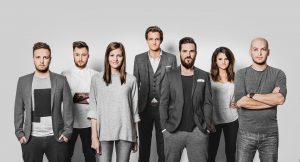 You enjoyed this read and want to stay updated? Subscribe to my newsletter below and benefit from the opportunity to get every new post directly send to your mail inbox.

Max Sommer is a specialist and advisor in the fields of content marketing, content strategy and brand management. He is head of the department "Brand & Content Marketing" at the international high tech company Anton Paar.