How to use mood boards in advertising and graphic design

There is nearly no professional design, photography or illustration work without mood boards. Advertising, Graphic design and other disciplines use them as a standard tool in their daily work routines. More and more they are also playing an important role in the fields of content strategy. The use of these visual mood collages becomes increasingly popular amongst web and UX designers as well as other creative heads. Read this blog post and understand why.

In the early stages of each design process, mood boards are a crucial factor for success. They build a common base of design understanding throughout all contributing project members and give a clear idea of the visual style, the image structure and also the color spectrum. Everybody who works in the creative industries exactly knows how hard it could be to introduce other people to own design ideas – mood boards help. But what does a mood board exactly look like and how does it help within the design process?

Mood boards and advertising – these two terms simply belong together. Advertisers cracked the mood board code long time ago and use them effectively in their design workflows: At the very beginning of each design process, there are brainstorming and inspiration stages. Within these stages a designer focuses on basic questions like: “which role should play the design in the overall context, what does the design will look like and which emotional impact will it have on the viewer?” Design ideas and inspiration snippets flash through a designers mind in various different ways. Mood boards help to make them concrete, perceptible and above all viewable in form of visuals. These visuals are collected, combined and pinned on a wall.

Mood boards as a visual language

Well-elaborated mood boards serve as translators of thoughts and emotions, so that a visual consistent collage of pictures is the result. Based on this, art directors make extensive and important design decisions, which will affect the whole production process. On top of that, mood boards trigger emotions by giving others an idea of the look and feel of the emerging design. Mood boards in advertising, graphic design and marketing are pretty established and renown. But also other industries could benefit from using them on a regular basis:

Mood boards are most commonly used in the graphic design, advertising and media scene. But let’s get specific: Whenever you are going to create a new magazine, a blog, an image film or a new advertising campaign, mood boards will become your best friends. Also when it comes to social media management, they can play an important role: Instagram and snap chat for example are visually based social media channels and need a consistent visual language. Let’s learn how exactly a mood board is set up?

Mood boards as an open dialogue

Which visuals a mood board contains, is basically not limited. Photos, info graphics, single icons, but also pieces of texts are allowed. Furthermore it absolutely doesn’t matter, if the content is found online or offline. In a first step, everything is allowed – just collect. Everything that attracts your eyes is going to be pinned. Sometimes it’s useful to add some notes to visuals – later on this makes sense if you want to know, why you’ve chosen a certain piece of design.

All roads lead to Rome – also when it comes to creating mood boards. The range of different tools and possibilities to work with mood boards is extensive. This could be on the one hand a simple pin board in your office and on the other hand a software tool like Photoshop. There is also a lot of different freeware on the web. Most of them is especially designed for making mood boards for advertising. Others provide even more functionalities. Here’s a list of my three favorite free tools – just check them out:

After collecting many, many different visuals in a first step, an evaluation process follows. In this stage it makes sense to also consult designers, who are not familiar with the project. The aim is to reduce the collage to only a few, but strong visuals. Inconsistent subjects should be removed. The mechanisms how humans identify foreign subjects was already described in the twenties by some German psychologists. In „The Gestalt Principles“ they explain that humans cluster visuals based on their their color, shape and size. What stays is literally a moody mood board.

Mood boards in the field

A good example for a nicely done project is the image spot of the LitesizerTM 500 of Anton Paar. My team and me, we put up a design concept before the video shoot. Also in the postproduction the focus was on creating a warm and cozy mood, which draws through the whole video. A collection of different video scenes, shows the consistent visual language and the consistent mood. 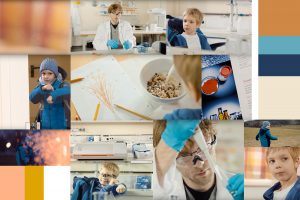 When it comes to using mood boards, there is nothing that could be done wrong. I experienced that matter, when I did a session on that topic at FH JOANNEUM’s masters degree course “content strategy”. During this seminar we developed the visual language of the courses’ open educational resource platform. This session proved: The best thing is to just start using mood boards and to invest some time in exploring how this design technique works. Four students of this masters degree launched the blog “fromnoisetomusic.com” – it’s visual language is a good example, of how fast mood boards can lead to satisfying results. Mood boards guarantee a common design understanding and determine the line of approach in operational work. It’s worth working with mood boards – trust me.

You enjoyed this read and want to stay updated? Subscribe to my newsletter below and benefit from the opportunity to get every new post directly send to your mail inbox.

Max Sommer is a specialist and advisor in the fields of content marketing, content strategy and brand management. He is head of the department "Brand & Content Marketing" at the international high tech company Anton Paar.